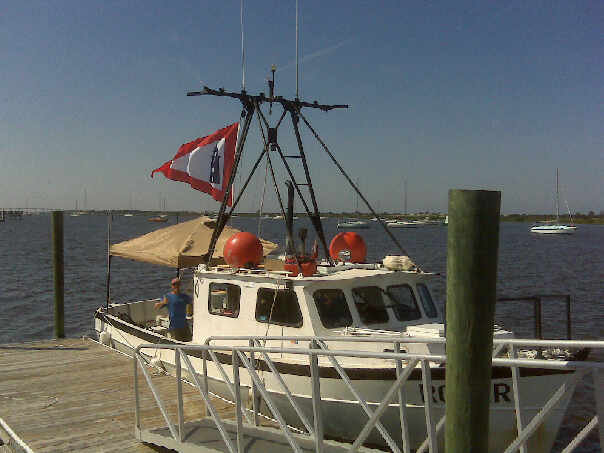 Dr. Sam Turner is president of IMH and is also Director of Archaeology at the St. Augustine Lighthouse & Museum in Florida

To support that school, IMH members Dawn Cheshaek (also president of the Maritime Chapter of the Archaeological Society of Delaware), Isabel Mack, Dan Lynberg, Kirk Pierce, and Dave Howe took Roper from the Potomac River to Florida.
The museum has several boats, but Roper is larger and can work a dozen divers comfortably.

We left Tall Timbers, Maryland, on Saturday, 23 May.  On the way south we towed Genie Girl, a classic 28-foot Chris-Craft, from Smith Point, Virginia, for IMH supporter Craig Thatcher.  We delivered her at New River, North Carolina, on Monday, 25 May.

Topsail Inlet (the next inlet below New River) was closed due to shoaling, and the weather forecast said southerly winds and 6- to 9-foot seas in the ocean, so we stayed in the IntraCoastal Waterway all the way to Florida.  Staying in “the ditch” meant a slower trip, but the compensations included meeting Nina and Pinta in Bogue Sound, just south of Morehead City.

We hoped to dive the U-85 (sunk in 1942 by Roper’s namesake) on the way, but the schedule and weather did not allow that.

We arrived at St. Augustine on Thursday, 28 May, and were met by Sam, Chuck Meide and Brendan Burke of the museum, and Tim Bevan, a “plankowner” who crewed Roper from Texas to Maryland in 1999 with Don Shomette, Mike Nowotny, and Dave.

Roper went to work on Friday and was fitted out with a sunshade over her aft deck and a huge museum pennant.  The field school site is a steamship wreck, perhaps with another wreck underneath or alongside it.  Mr. and Mrs. Bill Hutcherson of St. Augustine will provide dockage.

Roper will remain in Florida throughout June and most of July, then come back home to resume work in the Chesapeake and Delaware Bays

I will try very hard to figure out how to post photos from the trip.