Dawn Chesaek, Dean Frank, Charlie Reid, and I took Roper from Tall Timbers Marina to the Maryland DNR pier at Matapeake MD, loaded a new buoy anchor “clump” on board, and returned to Tall Timbers.  The round-trip took 24 hours.  Roper‘s big davit had no trouble lifting the clump and swinging it aboard, helped by her new super-high-tech davit turner: an 8-foot piece of 2-inch steel pipe.

The new anchor clump, nw chain, and buoy were deployed on the site, but there are a few loose ends to fix.

A few days ago, Lolly Vann and I slung the chain in 10-foot bights hanging outside Roper‘s port side, held by light line “stoppers” to cleats on the gunwale.

On 18 April we towed the buoy astern of Roper from Tall Timbers Marina to the site.  The marker ball that we rigged on the conning tower last year survived the winter and usefully showed the wreck’s exact location.  (We have three more balls in reserve if they are ever needed.)

When we arrived on site we brought the buoy alongside Roper.  Al and Sam dived and shackled the chain to the buoy.  We shackled the “tag line” to the staple on the clump, rigged the lifting wire from Roper‘s davit to a hook on the staple, put a “mouse” of light line across the mouth of the hook so it could not fall off, and shackled a 1,000-pound lift bag to the hook.  Then we lifted the clump, swung it overboard on the davit, and lowered it about 10 feet into the water.  Al and Sam dived to the clump and inflated the lift bag partway to ease the load on the davit as we paid out more chain and lowered the clump.

We lowered it to 40 feet, cutting the stoppers as needed.  At 40 feet we had a pelican hook connecting the chain to a heavy rope strap over Roper‘s port quarter cleat, so the chain took the weight of the clump and the lifting wire went slack.  Tom and Doug dived to the clump, deflated the lift bag, released the hook, and re-attached the hook and bag farther up the chain.  That step was necessary because Roper‘s davit wire is not quite long enough to lower the clump all the way to the river bottom.

The tag line was coiled on a reel.  Cap’n Bobby paid it out from Roper as the clump descended.  The line was 210 feet of 5/8″ laid Nylon, long enough to reach from the clump to the U-1105 and encircle the conning tower on the main deck.  There is no other known attachment point on the U-1105 that is strong enough.  Fred and Doug swam the tag line reel to the marker ball, descended to the wreck, and ran the line around the base of the conning tower.  They got the line around the tower but became short on gas and too cold to tie it off.  They rigged a zip tie to hold it temporarily, cut off the excess line, and brought that up with the reel.  While they were working the line, Al descended the chain and attempted to remove the lift bag and hook.  He was unable to free them, because the clump had spun on the way down and tangled the hook and bag.  We let the wire go and left the hook, bag and wire on the chain.  When Al, Doug, and Fred got back on board we returned to Tall Timbers.

Nobody got hurt, nothing broke, and the buoy and clump are on site.

Bobby, Fred, Sam, Dan, and I returned to the site.  The wind was southeasterly, gusting 20+ knots.  The sea conditions on site were choppy but adequate.  Fred and Sam dived.  They were able to tie the tag line, but the tangle of hook, bag and wire was too deep in the mud to fix, even after lifting the chain with a 500-pound lift bag.  So we made some progress, but we still need to clear the tangle and perhaps tighten the tag line.

Roper was hauled at Tall Timbers Marina for her annual refit.  We can fetch the U-1105 gear with our other boat Polly while Roper is “on the hard” or with Roper after she is launched but before 16 May when she will go to St Augustine for summer work with the Lighthouse Archaeological Maritime Program (LAMP).  Brendan Burke and Brian McNamara of LAMP will come to Tall Timbers on 21 April and spend a week or two preparing Roper for that work.

After the last season of work, Roper‘s bottom and topsides paints look fine but need another coat or two, her propeller has some dings that need repair, her zinc anodes need replacement, and her engine, electronics, and ports need some love and care.  Her aft work deck will be professionally sandblasted and coated with several layers of two-part epoxy paint.  We will also remove and re-bed her heavy davit and have all new injectors professionally installed in her Caterpillar 3208 diesel engine.

On Saturday morning, 17 May, Brendan, Tom, and Brian McNamara started Roper south for Florida.  She passed through Great Bridge Lock at midnight, averaging 7 knots on her new, hard, clean bottom.  She will spend June working a shipwreck from 1782 as part of the Lighthouse’s annual field school in underwater archaeology, and July and August searching for French shipwrecks dating from 1565.  She will come home to Tall Timbers in September, spend six weeks mapping a dozen World War One wrecks near Aquia and two Civil War wrecks near Quantico, and retrieve the U-1105 mooring buoy on 1-2 November.

An interim report on progress so far is attached.

Field work will start on 21 February, and we have added some items to the list.  The updated schedule is attached.  Dust off and tune up your dive gear, folks — this will be a very busy year.

IMH and our Mount Vernon project were featured today on the Kojo Nnamdi Show on WAMU (88.5 FM).  For a transcript go to http://thekojonnamdishow.org/ for 10/25/10, and click on Listen under Underwater Archaeology.

A revised preliminary report is attached for the Mount Vernon project, 24 April – 1 May 2010.  The formal, detailed report will follow in due course. 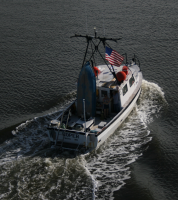 Weeather willing, Roper will sail from Tall Timbers for Florida on Saturday, 22 May, and arrive at St.Augustine around 27 May.  She will be on loan to LAMP throughout June for field work and a field school.