IMH’s field projects for 2014 include the following —

Specific dates will depend on weather and participants.  For more information or to join in fieldwork please click the “contact” button in the top right corner of this page and say which projects interest you.

Roper has finished her spring haul-out.  Major work included plumbing the fuel, water, and exhaust lines for the diesel generator, and adding an anchor windlass and roller, a new Furuno 500 autopilot, and one more antenna for an AirMar flux-gate compass and GPS for the autopilot.  Profound thanks to the energetic and capable Brendan Burke of the St Augustine Lighthouse & Museum; to IMH stalwarts Cynthia Loden Dowdle, Isabel Mack, Dawn Cheshaek, Kebret Andarge, John Dowdle, Kirk Pierce, and David Wright; and to Rick Meatyard and his gallant crew at Tall Timbers Marina.

Sea trials on 4 May were combined with a trip to the U-1105.  Tom Edwards, Craig Goheen, and Tim Manville dived to inspect the buoy chain and rig a floating ball on the conning tower for divers.  The site is officially open for the season.

On 11 May, Dawn, Dan, and I will get Roper underway for her usual summer field school and fieldwork at St Augustine, stopping in Georgia for a week to scan for sites for Chris McCabe of the state Department of Natural Resources.  After she comes home in August we plan to spend all September, all October, and half of November mapping approximarely 90 sites in the Potomac for the Maryland Historical Trust and US Marine Corps Base Quantico.

During September and October 2012, IMH plans to continue an underwater reconnaissance in the Delaware River for several American warships and one British warship that were sunk in 1777.  Our work will support the efforts of Andrew Doria – The First Salute, Inc., to build a replica of the brigantine Andrew Doria, one of the vessels lost.  She was one of the first four vessels purchased by Congress for the Continental Navy in 1775.  The project will be coordinated with the State of New Jersey and the U.S. Naval History and Heritage Command.

On our way to the Delaware and back we will also reconnoiter 88 possible shipwrecks in the Chesapeake Bay for the Maryland Historical Trust (MHT).  Five of the sites are in the Potomac, and 83 are in the Bay.  We have scanned many of them in prior transits, but have only dived a few.  Many of them may never have been dived.  The sites lie along 147 miles of transit from Tall Timbers MD to the C&D Canal.  Site data will be reported to MHT and nobody else.

Scanning will employ IMH’s hard-mounted sidescan sonar.  When conditions and manpower allow, we will also use a Marine Sonic Technologies “Splash Proof PC” sonar on loan from the National Park Service.  The Marine Magnetics “Explorer” magnetometer that was used in the first part of the project in April and May 2012 is not currently operational, but we will use it if it is repaired in time.  Participants can gain as much “scope time” as they want.

Targets selected by MHT will be dived by IMH volunteers, manually mapped, and scanned with metal detectors.  To maximize volunteer participation, those dives would be conducted on weekends and clustered geographically to meet divers.  The transit schedule would be adjusted to suit.  The project depends on IMH receiving funds to work in the Delaware River.  The Chesapeake work could then be performed along the way at minimal cost to participants.

Participation requires the usual diving waivers plus your agreement not to disturb sites, not to move or remove anything, and not to tell anyone outside the project where we went or what we found.  “No take, no talk.“

The tentative schedule is to depart Tall Timbers on 17 September, scan the Chesapeake sites 17-21 September, work the Revolutionary War sites 22-30 September, scan some Delaware Bay sites 1-6 October, show the IMH flag at Coast Day at Lewes on 7 October, work with the University of. Delaware for a few days to map a large shipwreck at Cape Henlopen, and dive the Chesapeake sites from (say) 10 October until Hallowe’en.

IMH will partner with the Maryland Historical Trust, the Virginia Department of Historic Resources, the Mount Vernon Ladies Association, and the Lighthouse Archaeological Maritime Program to conduct the first known underwater survey at Mount Vernon.  Details are in the attached pdf file. 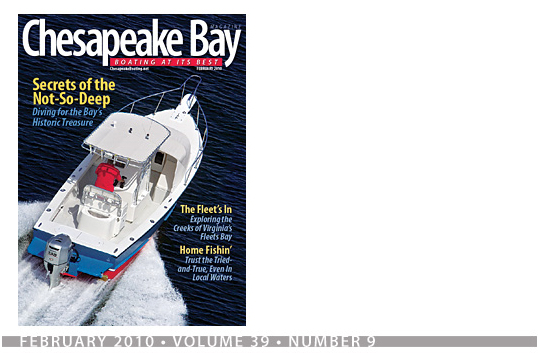 The February issue just came out and has a cover article about IMH and the U-1105. Secrets of the Not-So-Deep

“Splash! Jody Argo Schroath dons her cold weather gear to spend a few days with members of the Institute of Maritime History (IMH). These hardy scuba divers spend their free time diving the murky waters of the Bay – searching for, preserving and keeping a lid on the whereabouts of the Chesapeake’s shipwrecks.”

She safely returned from St. Augustine on Friday, 7 August.  The folks at LAMP worked her hard and took very good care of her.  She is fully operational for the upcoming field school in the Potomac.

We might take her south again next year for another session, perhaps with some modifications — including better stowage on deck and below, and a small derrick for lifting more ballast from the site LAMP is working.

Plans have gelled for our week-long survey of the historic harbor at Lewes, Delaware, 29 September through 7 October.

With active support from the City of Lewes and University of Delaware, the Archaeological Society of Delaware, the Lewes Historical Society and IMH will reconnoiter the inner and outer harbor at Lewes, and the waters off Slaughter Beach, by sidescan, magnetometer, and divers. Approximately 20 people will participate.

The Delaware Division of Historical and Cultural Affairs has also asked us to visit a colonial wrecksite, believed to be the merchant ship Severn (foundered 1774), to obtain specific data for comparison with baseline data that were collected a few years ago.

We have almost finished work under the FY2007 grant from Maryland Historical Trust. We found several uncharted wrecks (some old, some new) and will finish mapping them during the next month or two. When those are done we will continue work wherever the Trust wants.

The project ran over time but under budget, with much more volunteer participation than we had planned or hoped. Thanks to all who joined in the effort!

During the first week of October we will recon the area around Lewes, Delaware, for the Division of Historical and Cultural Affairs, in cooperation and with the generous support of the Archaeological Society of Delaware. For a copy of the project plan, email david.howe@maritimehistory.org.