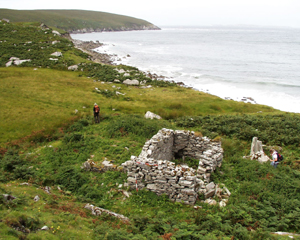 Today I have joined the Achill Archaeological Field School students for their weekly field trip, lead by Field Director Simon O Faolain and Managing Director and Field School founder Theresa McDonald. The students will be traveling to Corraun to see a number of historical and archaeological sites. Theresa has promised to show me a stone structure used as an ice house for Achill’s 19th century commercial fishing industry. This commercial marine activity was introduced to Achill by a Scotsman named Alexander Hector, who came to the island in 1855 to start a salmon-fishing venture.

Hector’s operations were located on various coasts throughout Achill and the neighboring Corraun peninsula. Last year we documented one of Hector’s fishing stations built at Annagh (north side of Achill), known locally as the “Scotch House.” This complex included a stone one-room structure with a fireplace and chimney, with an adjacent raised platform bounded by retaining walls that delineated a working area. Part of this space was further divided by a low stone wall extending from the building, and a shelf running along the exterior wall of the building. Hector introduced a device known as the bag net which proved very successful at catching large quantities of salmon. He had several bag nets deployed offshore Annagh and a number of other places along the coast. The ruined complex at Annagh, like those that once existed at Keel and elsewhere, would have served as a staging and working area for Achill fishermen, who would have used Hector’s boats and equipment and been supervised by Scottish overseers. The Annagh station may have been used to house fishermen or overseers, to store and maintain boats and other equipment, or to process fish and prepare it for transport to a centralized curing station at Keel or Achill Sound. Ruins of the fishing station at Annagh on the north coast of Achill. Site plan of the Annagh fishing station, known as the “Scotch House.”

Hector also had men and nets working several areas of Corraun’s coast. Corraun is the large peninsula on the mainland adjacent to Achill. Part of Achill Parish, Corraun has always been associated with Achill. At least one structure related to Hector’s activities remains on Corraun, the ruined remains of an ice house. Like Achill, Corraun features beautiful scenery and a wide variety of historical and archaeological sites.

After their morning lecture, I join the Field School students as we set out from Dooagh on the bus. Once we pass the town of Mulranny we turn south to follow the southern coastline of Corraun back towards Achill. Along the way we pass a site where an Spanish Armada ship, the San Nicolas de Prodaneli, reportedly was wrecked after this famous failed invasion in 1588. If only it were this easy to find an Armada shipwreck! The San Nicolas de Prodaneli, named after her commander and probable owner Marin Prodanelic, was an 834-ton merchant carrack built in Ragussa, or present-day Dubrovnic, Croatia. A member of the Levant (Mediterranean) Squadron, she boasted 26 guns and 355 men. Evidence in the archival records suggest she was wrecked at a place called “Fynglasse,” which is believed to be a location known as Tourglass on Corraun. Local memory also suggests a Spanish ship went down here. In future years we may return to search for this shipwreck, with sophisticated geophysical or remote sensing equipment such as a side scan sonar and magnetometer.

Continuing along the scenic drive along Curraun’s rugged coastline, we stop at a place known as Dooaghbeg, where the students file out of the bus and march down to the sea-cliffs. The two gables of the ice house can be seen ahead, protruding out of the ground by the sea. In the background is Clare Island. Upon closer inspection, we can see that the bulk of this structure is underground, which makes sense for a building designed to store ice for extended periods of time. Hector’s bag nets were so effective that it became a challenge to preserve large quantities of salmon long enough to transport it to a centralized curing facility located at Achill Sound. The ice stored in this semi-subterranean structure would have been used to temporarily preserve the fish, which might also have been stored in this building. According to documents and local memory, Hector’s employees at Keel village on Achill cut ice from Keel Lake during the winter, which would have been stored at an ice-house there. This indicates a significant climate change has taken place here since the 19th century, as the lake no longer freezes in the winter. At the ice house we are visiting today, ice was gathered by laborers who climbed to the top of Corraun mountain. Field School founder Theresa McDonald reviews the history of Alexander Hector and his fishing operations on Achill to the students gathered inside the ice-house. A series of mortises or put-log holes indicate the placement of a second-story floor located just above the interior doorway lintel. It is most likely that ice was stored below, but the function of the upper room remains unknown. This may have been storage for casks or other devices used to pack the fish. After leaving the ice-house, we walk along Corraun to a beach facing the Sound dividing Achill from Corraun. Theresa points out a shell-midden that may date to the Mesolithic, a testiment to the long-standing maritime occupations of this region. We have a great view of the island of Achill Beg (“Little Achill”), which hides the 1894 wreck of the Norwegian bark Jenny, and Achill itself.