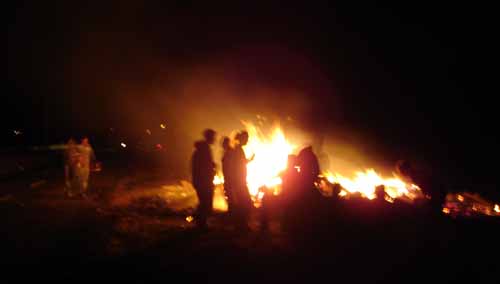 After another low tide recording the Successful wreck at Achill Sound, I am looking forward to participating in a traditional Irish event, St. John’s Eve, also known as Bonfire Night. School kids and adults alike can’t hide their excitement over the upcoming conflagration. At various locations throughout Achill, and over the entire country, massive piles of refuse are collected and, around midnight, will be set alight in a series of huge bonfires.

I am attending the westernmost bonfire in all of Ireland, at the western end of Dooagh. All day long tractors are seen going back and forth on the roads with loads of combustible materials. It is a convenient way to dispose of mattresses, broken furniture, and other rubbish in an area so remote that garbage service is not available to or adequate for every household. It seems likely to me that this tradition, which dates to pagan times, may have always been a way to dispose of refuse generated in the prior year. It certainly has always been an important and fun social gathering for entire communities. Tonight’s Bonfire is no exception. Virtually the entire village has come to enjoy the blaze, which puts off a good deal of heat on an otherwise cold night. Children run amok against a background of flame and heat ripples, American archaeology students mingle with locals, men heave nightstands, sofas, and chairs into the burning maw, and ladies make their way through the crowd with platters of sausages and other treats. As the night wears on, the kids go off to bed and a hard core group lingers, lounging on a couch that has thus far escaped the fire, singing traditional Irish songs and enjoying what is known in Gaelic as “craic” (pronounced “crack,” it means simply good times or great fun). The craic goes on this year until around 4 am . . .