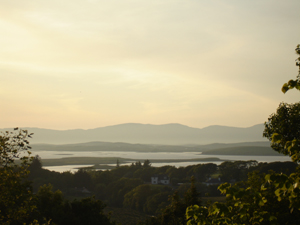 This is the first of a series of regular updates I am writing so that those interested in the Achill Island Maritime Archaeology Project can follow our activities and share in our discoveries as we make them. My name is Chuck Meide, I am the project director, a graduate student at the College of William and Mary, and the Director of LAMP (the Lighthouse Archaeological Maritime Program, based out of the St. Augustine Lighthouse and Museum). I am also an archaeologist with the Institute of Maritime History, the institute which, along with those mentioned above and the Achill Folklife Centre, is sponsoring this project. Welcome to the first update for the project!

This is the first of a series of regular updates I am writing so that those interested in the Achill Island Maritime Archaeology Project can follow our activities and share in our discoveries as we make them. My name is Chuck Meide, I am the project director, a graduate student at the College of William and Mary, and the Director of LAMP (the Lighthouse Archaeological Maritime Program, based out of the St. Augustine Lighthouse and Museum). I am also an archaeologist with the Institute of Maritime History, the institute which, along with those mentioned above and the Achill Folklife Centre, is sponsoring this project. Welcome to the first update for the project! Achill Island is situated between Blacksod Bay to the north and Clew Bay to the south. Clew Bay presents a beautiful vista, and allegedly has 365 islands, one for each day of the year. Situated on the mainland at the eastern margin of Clew Bay is the town of Westport. This became one of the most important commercial centers in the West of Ireland during the nineteenth century, especially after the close of the Napoleonic Wars. The trade at Westport was vital to the islanders on Achill. Achill boats provided fuel for Westport in the form of turf (stripped from the bogs), in exchange for limestone (which was burned to produce lime for fertilizer) and manufactured goods. Many of the ships wrecked in the treacherous waters around Achill were bound to or from Westport. Because of its proximity Achill islanders, who took every opportunity to salvage timbers and cargo from wrecked ships, had access to goods from around the world I have decided to spend a few days in Westport, getting organized for the fieldwork ahead and conducting some background research on the maritime history of the town, which was historically interconnected with the surrounding islands. I will be staying at the home of a local family, the Shanleys, who for the last century have owned one of Westport’s oldest businesses, Shanleys Drapers. Like all the retail shops that once lined the town’s main street, this family-owned clothing shop would have been dependant on ships to bring in the materials and goods available to local townspeople.

Wandering around the town, the importance of its historical relationship with the sea is evident everywhere. This is the quay or waterfront where ships would have unloaded their cargos. Today the Clew Bay Heritage Centre can be found here, which is worth a visit for anyone traveling to the area. Goods were stored in these stone warehouses, which front the quay and have been converted to modern shops. These are the same warehouses seen in this old photograph of the quay, taken sometime between 1890 and 1905 (image courtesy of John O’Shea). By the waterfront an old anchor is on display. It dates to the nineteenth century, and likely came from one of the ships entering the harbor from Clew Bay. On Monday I paid a visit to the home of John and Sheila Mulloy. They are both local historians; John is the President of the Westport Historical Society and Sheila is the editor for their journal, Cathair Na Mart. John has agreed to spend the afternoon talking with me about the history of maritime trade on the Bay. His family ran a shipping business out of Westport and nearby Newport for the last two centuries, so he is uniquely knowledgeable about this topic. John also shared his collection of 19th century nautical charts and historical documents, which I can make a quick record of with a digital camera. Among many other things, I learn from John that Achill Islanders were very involved with the trade in and out of Westport. The following document is an 1855 record from the Westport court house listing the owners, ships, and tonnages of vessels involved in the local trade. Many of these names are of well-known Achill families, including Kilbane, Gallagher, and Patten. Mr. Mulloy tells me that many Achill men operated their hookers (a local type of sailing vessel) as lighters. A lighter was a smaller or shallow-drafted vessel used to shuttle cargo back and forth for large ships that were too large to enter the harbor. Deep-drafted vessels, such as the Confidence shown below, would wait further out in the harbor for lighters to carry their cargo to the quay at Westport. The Confidence was a ship used by Mr. Mulloy’s family until it was confiscated by Germans in the First World War. Tools and other manufactured goods brought on these ships were thereby available to local townspeople and others in the countryside at family-owned establishments such as the ironmonger and grocer’s shop owned by the Mulloys (image courtesy of the Clew Bay Heritage Centre). Ships navigating the Bay needed the help of local seamen who were familiar with these waters. This was especially important considering the large areas of shallow water, often completely exposed at low tides, and the strong tidal currents throughout the area. Achill Islanders typically served as pilots for the outer Bay. An Achill pilot would row out in a traditional boats such as a curragh or yawl to meet incoming ships. Often a pilot would compete with another pilot in a different boat, and the first one to reach the incoming merchant ship would get paid to guide it into the inner area of Clew Bay. From there the ship would meet a pilot for the inner Bay. According to Mr. Mulloy these pilots did not compete with each other but followed a system where they took turns leading ships the rest of the way into Westport Bay. From here an incoming ship would either dock at the quay or, if it was too large, moor at an anchorage and wait for lighters to offload its cargo.

Mr. Mulloy noted that one of the last lighters to be used in the Westport trade was abandoned in the harbor, where its remains can be seen at low tides. He says it has been abandoned for a very long time, longer than his lifetime, which means it may have been used in the very early 20th century or the late 19th century. These kinds of vessels, probably locally built and operated, were a vital link in the trade that connected Westport and Achill to the rest of the world. The designs of vernacular or locally-built working watercraft have for the most part been lost to history, even though they were once so widespread they were an everyday sight. I am interested in finding this abandoned vessel if it still exists. Before heading to Achill, we will try to locate this wreck.