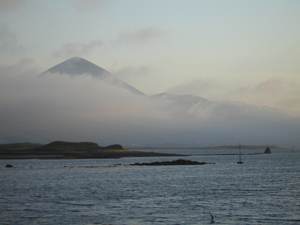 The following evening we set out to the quay at low tide to look for the wreck that local historian John Mulloy told us was abandoned and exposed on the foreshore. My host Mr. Shanley has also seen this wreck, though like many people living on a historic waterfront he hasn’t given much thought to it until an archaeologist comes around asking questions about it. The weather has been sunny and beautiful, something that is not necessarily the norm in Ireland. At the end of the pier on Roman Island we see the mist shrouding Croghpatrick, a mountain with religious significance which has long drawn pilgrims to the area. Ireland, unlike Florida where I am from, displays a significant tidal change. Around 8 feet of water goes out with the tide every six hours, exposing a large area of muddy ground that is known as the foreshore. This phenomenon is useful for maritime archaeologists, as it is easier to find shipwrecks and other maritime sites when large areas of the seafloor are visible. Even though the tide is beginning to come back in, it is not to hard to find the remains of this wooden vessel protruding from the mud off in the distance (in the center of this picture): After spotting the wreckage, we meet another local who tells us that when he was a boy someone told him the wreck was a vessel that was shipwrecked offshore the island of Inishturk. Much to the islanders chagrin, the hulk was taken from them by the Coastguard or “revenue men” and towed to Westport, where they were unable to sell it and it eventually was abandoned and burned. It is not uncommon to get conflicting stories concerning the identities of old shipwrecks. Either of these two stories could be true, partially true, or inaccurate. Was this wreck a lighter or a salvaged shipwreck? Closer inspection might help solve the mystery.

The following day I return to the quay in the morning, to catch the low tide. We have secured permission for me to borrow a small boat moored at the pier to get out as close as possible to the wreckage. As the boat is stored without its fuel tank, I use its oars to row out the long waterfront, much as generations of watermen did before me. Struggling somewhat in the tidal current and winds in a boat not designed for rowing, the process is too slow despite my eagerness. Gradually the wreck comes into view. By the time I reach it, the tide is coming in, but there is still time to take some photographs, make some observations, and record a few key measurements. The exposed wreckage represents a sizable vessel, measuring almost exactly 20 m (65.6’) in length, and it is at least 6 m (19.7’) wide. It is listing sharply to one side, though without further inspection we cannot tell which end is which, or to which side it leans. Its substantial timbers are covered in kelp, which is common in the summer months when it grows thickly on rocks and other submerged materials. One side is more or less intact, with frames or ribs exposed well above the mud, while most of its other side and indeed most of the hull itself is buried. The buried portion of the wreck likely has been well-preserved by the muddy sediments. We are not planning on digging any of it out, as its muddy covering is the best way to protect the timbers from deterioration. Many of the frames have survived on the exposed side of the vessel, and some extend upwards from the sediments as high as 1.85 m or about 6’. These frames provided structural strength to the ship, and their curvature defined the shape of the hull. The fact that they have survived to such a length means we will be more likely to reconstruct the original shape of the hull. A lighter would have typically been shallow-drafted or displayed a relatively flat bottom in order to negotiate shallow waters. The longitudinal timber visible in the above picture (running along the base of the frames) might be a keelson, or central strengthening timber. It is also possible that this timber is a stringer, or timber offset from the keelson, which in this case would be buried further beneath the mud. Taking the time to clear the kelp and closely inspect the hull will make it easier to distinguish which timber is which.

The frames measure 5” across (sided dimension) and 5 to 6” deep (molded dimension). Each frame is made up of various overlapping members attached to each other side-to-side. The shipbuilders used round-shanked transverse iron bolts to attach the frame pieces (futtocks and floors) to each other. When the frames were complete, outer hull planking was attached to the outer surface of the planks with square-shanked iron spikes. Round iron bolts were also used to hold this planking in place. They were driven through the plank, frame, and an interior set of planking known as ceiling planks. The picture below shows the outer surface of one frame pair. Visible are a transverse iron bolt which would have held a now missing frame member, and two planking spikes.

Observing and recording these kinds of details will lead to a better understanding of how this vessel was originally constructed, and will provide clues into its age, function, and identity. But for now my time is up—the waters are rising quickly, ending this preliminary inspection. As I row back to the pier, the timbers of the mystery wreck behind me are slowly submerged. It has now been almost a full week in Westport. While I am planning on returning to the Westport Quay Wreck again during the two-month project, it is time to get to Achill. I have spent two previous summers there, and there is something about that island that leaves visitors thinking about returning. As the sun sets over Achill I cannot help but anticipate returning to this island, with its rich history, friendly community, and spectacular views.