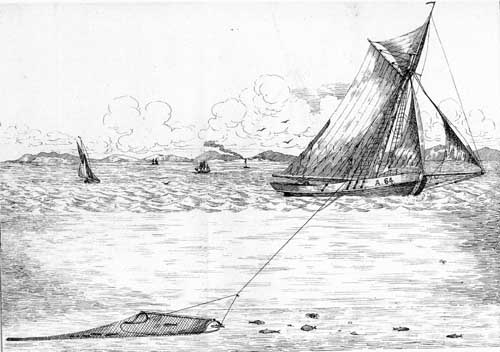 Today’s plan is to visit the wreck of an old fishing trawler named the Successful. This vessel may have been originally built as early as the late nineteenth century, though it certainly operated through the first decades of the twentieth century. Around 1950 it was a derelict vessel in Westport, and it was bought by the Sweeny family of Achill Sound for only five pounds.

The Sweenys were involved in a variety of maritime enterprises including commercial fishing and shipwreck salvage, and the Successful was intended to support theses activities. While moored in the Sound, however, it ran aground during a storm and was abandoned after recovery efforts proved fruitless. Successful was both steam- and sail-powered, representing a short-lived hybrid vessel type during a period of rapid technological change in the British commercial fishing industry. The introduction of large steam-powered trawlers constituted the last stage of the transition from traditional subsistence fishing to commercial fishing that took place in the British and Irish isles over the nineteenth century. This picture above is from a book titled The Deep Sea and Coast Fisheries of Ireland, with Suggestions for the Working of a Fishing Company by Wallop Brabazon, published in 1848. It depicts a schooner-rigged sailing trawler of the type recommended by Brabazon for a profitable fishing endeavor in Irish waters. The boat is depicted underway hauling its trawl or nets. The Successful was a similar type of vessel, though it had two masts and an unknown rig. It also had a propeller driven by a steam engine. While the engine is missing (likely salvaged either before the vessel was sold to the Sweenys, or after its loss in the Sound) a boiler does remain on the wreck. It is very small for a ship this size, suggesting that Successful may have been underpowered, and might have used its small engine mainly to assist in maneuvering and to supplement sail power while underway. The ship may have been originally built as a sailing vessel, and had the engine added during a refit, in order to gain some more profitable years from an otherwise obsolete vessel. When investigating this wreck we are thinking about these kinds of research questions, and Successful promises to lend insight into how technological innovations were adapted in this localized maritime setting. The wreck is located on the foreshore, the area of the sea-bottom exposed during low tide. It is situated in the Sound, north of the bridge and the town of Achill Sound (visible in the background of this picture). This makes it readily accessible to project archaeologists. Joining me today is Leonie Roy Archambault, an archaeologist who was a student in the 2004 Achill Archaeological Field School. She has returned to Achill to assist in the Field School, and has agreed to help me today on the shipwreck site. The wreckage is covered with a thick growth of kelp and other seaweed. Our first step is to remove this growth by picking it off by hand, in order to visibly inspect the site. We spent some time recording the wreck remains last year, and the kelp has grown back since then. We have less than a six-hour window to work on the site before the tide rises again and covers the wreckage. As we continue our tedious work, objects previously obscured by kelp become recognizable, like the winch pictured below before and after clearing. It was likely used to deploy and haul in the trawl net during fishing operations. Other recognizable features include the two-bladed propeller and a boiler which would have originally been in a vertical or upright position. Many other objects remain unidentified, even after being cleaned of marine growth. Here archaeologists inspect a heavy molded plate or fitting of unknown function. As the tide begins to rise, most of the wreckage is exposed and clear of kelp. Now it will be much easier to observe and record details of the hull and other artifacts for the ongoing process of documenting this shipwreck.

We have recorded much of this wreck last year, though we have not yet attempted to document the rudder and attached steering apparatus, a complex feature which appears to have collapsed with and upon articulated transom timbers. Making detailed scaled drawings of this area will be one of our first tasks on this shipwreck this season.

The day has turned out to be a beautiful one. Once back home, the view of Minaun Cliffs beyond the bay at Dooagh is breathtaking.