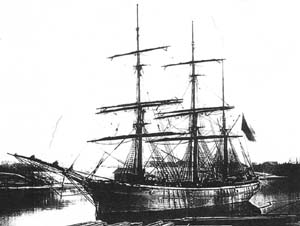 The Norwegian sailing bark Jenny was lost at Achill Beg Island on route to Hamburg, Germany from Morant Bay, Jamaica, on 13 January 1894. She had a cargo of logwood and a crew of ten men, all of whom survived the wrecking.

Built in 1865 at Drammen, Norway by one J. Jorgensen, she was 29 years old at the time of her sinking. Though this is rather old for a wooden-hulled sailing ship, Norwegian merchants were known for utilizing older ships to eke out profits in the bulk cargo trade. She was single-decked and measured 135’ 4” in length, 32’ 4” in breadth, and 17’ 2” depth of hold. Her home port was Christiana, Norway, her owner was A. F. Koblerup, and her captain was L. Andersen. The ship was stranded and smashed against the rocks in a force 1 gale coming in from the southwest. Pictured below is the Jafnhar, a 498-ton Norwegian bark that was probably very similar to the Jenny, which measured 492 tons. The story of this shipwreck has been passed down from generation to generation, so a number of Achill individuals whose families come from Achill Beg Island (“Little Achill,” which is now uninhabited) remember this event. One of our friends on Achill, Jim Corrigan, told us how his grandfather, a local pilot who guided ships through the outer Clew Bay, remembered that the islanders woke up that morning to find the large three-masted ship wrecked in the cove. Jim is the one who first told us about this wreck, told us how to find it, and loaned us tanks and weights for our diving.

Today we are visiting the site on the wooden-hulled charter vessel Naomh Davnait, which was built and is captained by John O’Malley, a third-generation boatbuilder. John’s grandfather came to the Corraun peninsula from Clare Island, and the family has been making boats ever since. Once in the cove, we anchor the boat and prepare to dive. Today we only have one tank for each of us, so all three of us will be diving together. Our local friend Jim Corrigan will be getting us eight tanks by Monday, so that when our full team is here we will be each diving twice a day. The Jenny lies beneath these impressive seacliffs. This is a beautiful and dynamic setting for a dive, and the landscape is just as rugged below the surface.

The view of the Naomh Davnait with divers about to enter the water. The divers safely enter the water and descend. Archaeologist Norine Carroll slowly makes her way to the bottom. The divers have entered a strange underwater world of kelp-covered rocks and submerged canyons. The bottom is no deeper than 35 to 40 feet, but the topography is dynamic and varied. The sea-cliffs above the surface continue here, and are divided by gullies and canyons, while everything is obscured by constantly flowing ribbons of kelp. The Jenny has been completely smashed to pieces by the initial wrecking process and the subsequent century of storms and heavy surges. Pieces of the ship’s hull, cargo, and fittings are scattered throughout a large area, usually hidden by kelp in the innumerable gullies that criss-cross the bottom. While this is a beautiful dive, it is immediately apparent that it will be a challenge to produce a map of the scattered wreckage. It is actually simply a challenge just to keep from being separated from our buddies while navigating this alien landscape. It is not long, however, before we begin to encounter bits and pieces of wreckage. Pictured below are two pieces of logwood, the main cargo carried on board the Jenny. Jamaican logwood became popular in the 18th century for the manufacturing of red, purple, orchid blue dyes. Logwood is a dense tropical hardwood, and pieces of the shipwrecked cargo that washed ashore were prized by local islanders for use as thole pins or oarlocks for their curraghs or skin boats. One set of logwood thole pins were so hardy that they would outlast several sets of oars. The wood is very dense and heavy and does not float, so many pieces remain on the sea floor to this day. The divers encounter several other pieces of logwood and other timbers, along with what appears to be a U-shaped lead tube of unknown function. We also observe several iron knees. These are heavy rods of iron bent at right angles to serve as deck supports. We have tied a buoy to this one, so that we can easily return to this spot, which appears to be an area of concentrated wreckage. After a 53 minute dive, we have exited the water and returned to the boat. Our mission, to locate and buoy wreckage from the Jenny, has been successful. Our dive boat is not available tomorrow, so we won’t be diving until the following day. This is not too much of a problem, since our final team member, Sam Turner, will be arriving in Westport tonight and tomorrow he’ll need to sleep off some of the jetlag. We’ll be back on Tuesday with two two-person dive teams, to return to the wreck of the Jenny and that of another, unknown ship, which sank off the coast of Clare Island to the north. Things are beginning to get exciting around here!